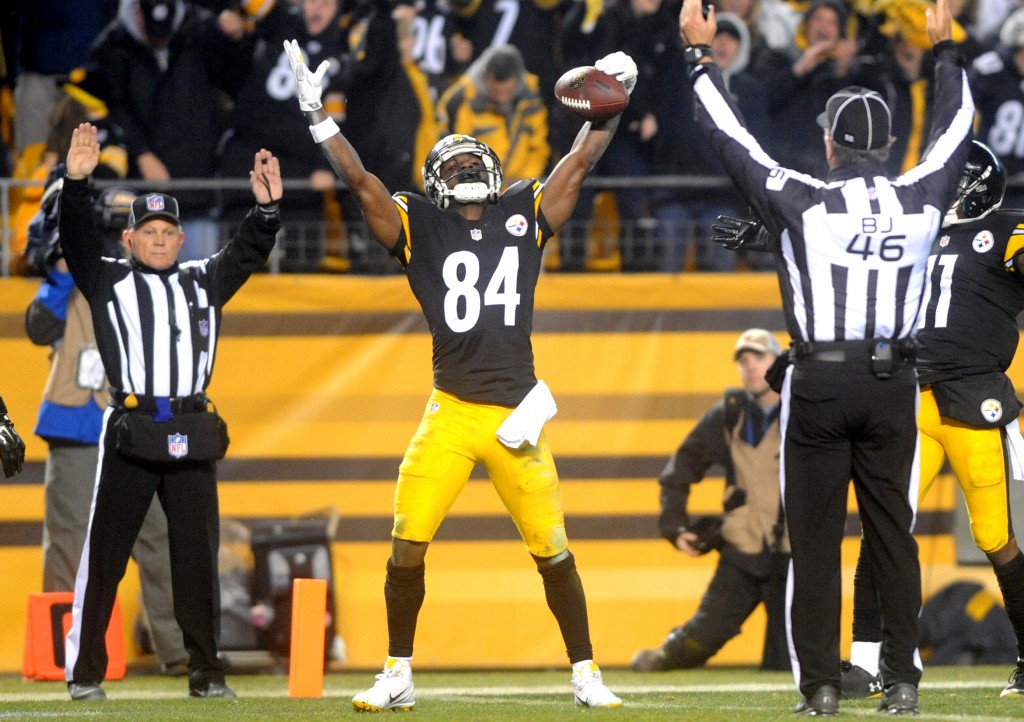 We’ve been out of the blogging game for the past year, and we are back and super excited to be adding a new column. This is called The Vault. Up until now, we have mainly posted about weddings, but there are many other aspects of our photography, business, and career. I (Vincent) have gotten many requests for stories about my career as a professional sports photojournalist, so we’ve decided to add a new feature. This column will give you an inside look into my world as a photojournalist, news and sports photographer.

It will be called The Vault because I have so many images in the archives from the past, both recent and from the way back, that the name seemed perfect. Most of the time it will be an extended caption to explain the image and what the situation was like surrounding that moment. Other times, there will be a longer story. I’m extremely excited for this addition to the blog and I hope you will enjoy it!

Pittsburgh Steelers wide receiver Antonio Brown, along with two referees, work together in harmony to signal that Brown had scored on a 45-yard touchdown pass from quarteback Ben Roethlishberger during the AFC wild game game against the Baltimore Ravens at Heinz Field in Pittsburgh, Pennsylvania. After a review, it was determined that Brown landed inches from the goal line. The play was ruled a 44-yard completion but no touchdown. The Ravens had been in control nearly the entire game but after a Baltimore turnover, the Steelers struck back with this play. This moment was the one bright spot for Pittsburgh.

I positioned myself in the right corner of the endzone, preparing for a quick strike by the Steelers. They have a tendency to look for a big splash play after a turnover, especially when they are losing later in a game. My hunch turned out correct as Roethlisberger heaved the deep pass into the Pittsburgh sky. My eyes and camera shifted quickly towards the ten yard line, where I saw Brown speeding downfield. I kept my lens tight on Brown as their body language assured that was where the ball was headed. Brown stopped short, leaped, and hauled in the pass that the defender couldn’t see with his back to the play. My image of the catch was nothing special, but when he jumped up, arms outstretched, along with being bookmarked by both referees with hands in the air, I knew that was the image. The sideline worker saw my image in the back of my camera and joked how it looked like they were dancing to the YMCA.

It would have meant much more if the Ravens didn’t dominate the remainder of the game and win, 30-17. What would have been another classic Steelers playoff moment turned into noting more than a footnote. Hence the reason it fell back into The Vault.