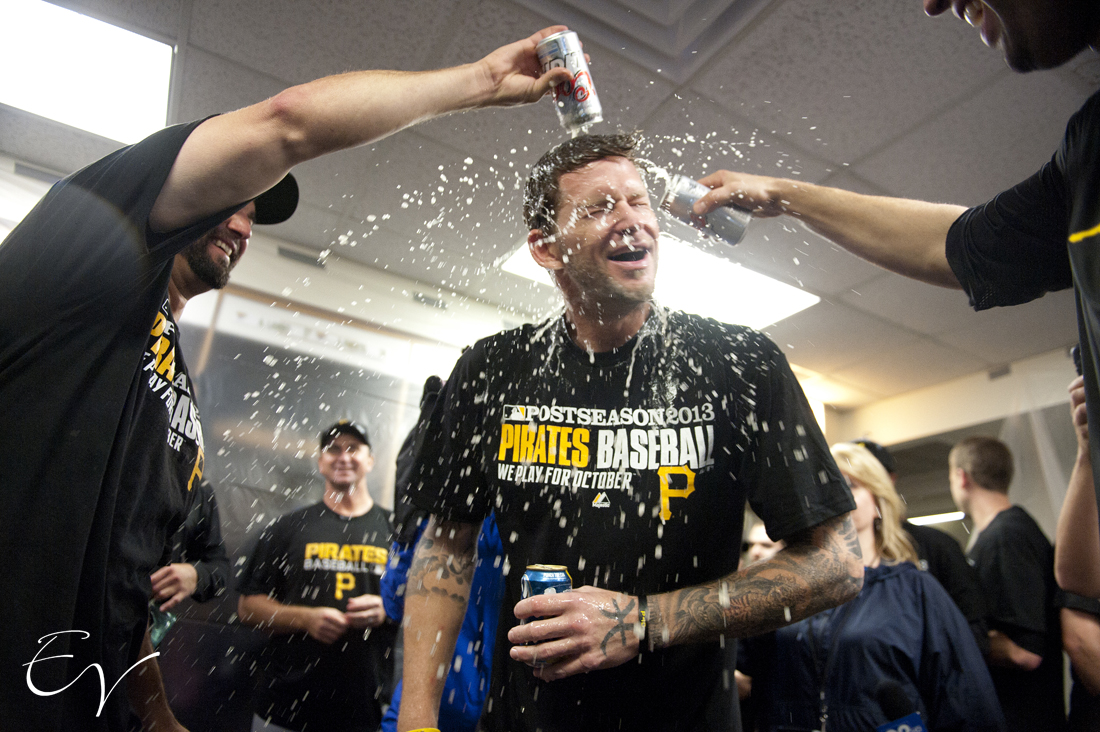 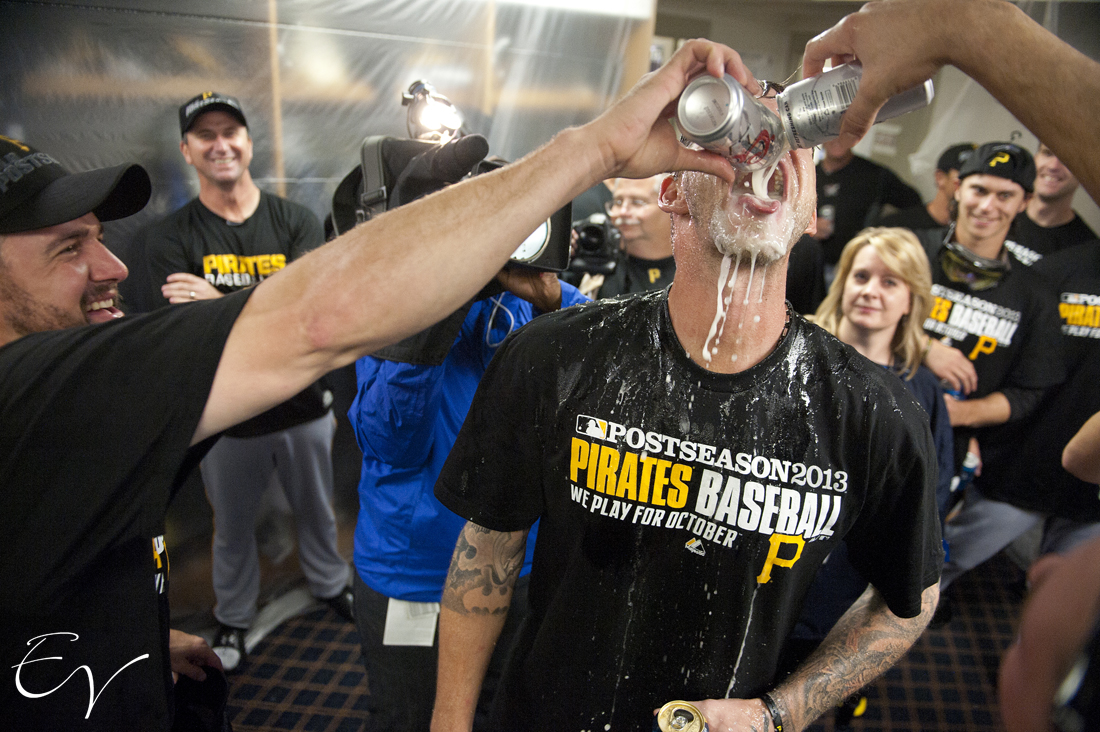 I’m not sure how to describe what it was like being in Chicago Monday night, but I will do my best. I headed to the Windy City to (possibly…hopefully) photograph the Pirates clinching their first playoff berth in more than twenty years. I had heard through a source
that the team had ordered a dozen cases of champagne for the celebration. I’ll spare all of the travel details and start near the end. One out away from victory, With Pittsburgh leading 2-1 with two outs in the bottom of the ninth and a runner on first, Chicago’s Ryan Sweeney blooped a single into right field. Nate Schierholtz attempted to score after the ball was bobbled by rightfielder Marlon Byrd. A play at the plate followed, and Pirates catcher Russell Martin blocked the plate and tagged Schierholtz to save the victory, holding the ball over his head in his victory formation.

Madness ensued, as a partial playoff celebration began on the field. The Pirates still needed the Nationals to lose to clinch the spot.  They were losing in the ninth inning, 4-3. Players and coaches ran through the dark, narrow hallways  of Wrigley Field and up the stairs to their clubhouse. Aside from the Root Sports crew and Pirates team photographer Dave Arrigo, the rest of us in the media were held right outside of the locker room door until we were given clearance to enter. A few of us were checking the score of the game on our phones and relaying back to the other reporters and photographers. We knew there were two outs in the ninth. We waited and waited. The booming chants of “Let’s go Bucs” from the Pirates fans in the concourse below added to the drama.

The quiet tension was shattered by the euphoric screams from the other side of the door. The Nationals had lost, apparently, and what sounded like the wildest frat party in history was happening a few feet away, but I could only stare at the clubhouse door. Minutes, seeming like weeks, went by and the door was still closed. All I could imagine was the scene in there and all of the moments and photographs waiting to be made, but all I saw was a big white door in my face. An impatient reporter eventually opened the door to check, and someone from the team told us to wait a few more seconds. The door was open, and my first sight was rookie pitcher Gerrit Cole laughing like a twelve year old spraying champagne. We were allowed in and it was all a blur until I looked at the photographs.

The only way I can describe it was sheer happiness. Hugs. Tears. Laughter. There was such a sense of joy, as well as relief. Twenty years of losing with do that to a team. But that time is over. Pittsburgh native Neil Walker hugged everyone he saw while A.J. Burnett was doused by his teammates with a beer shower over his head. Andrew McCutchen had the biggest smile I saw and Pirates traveling secretary Greg Johnson was hunted down and doused with beer by the entire team.

Nights like that do not happen often and I was grateful to have witnessed it. 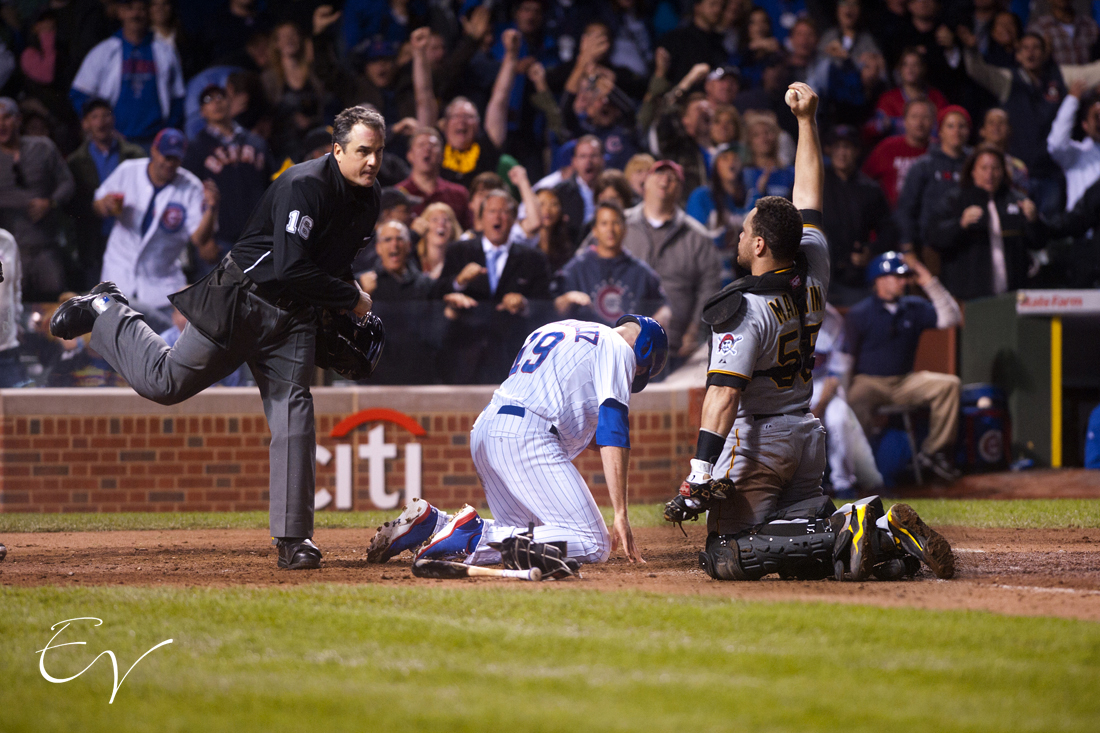 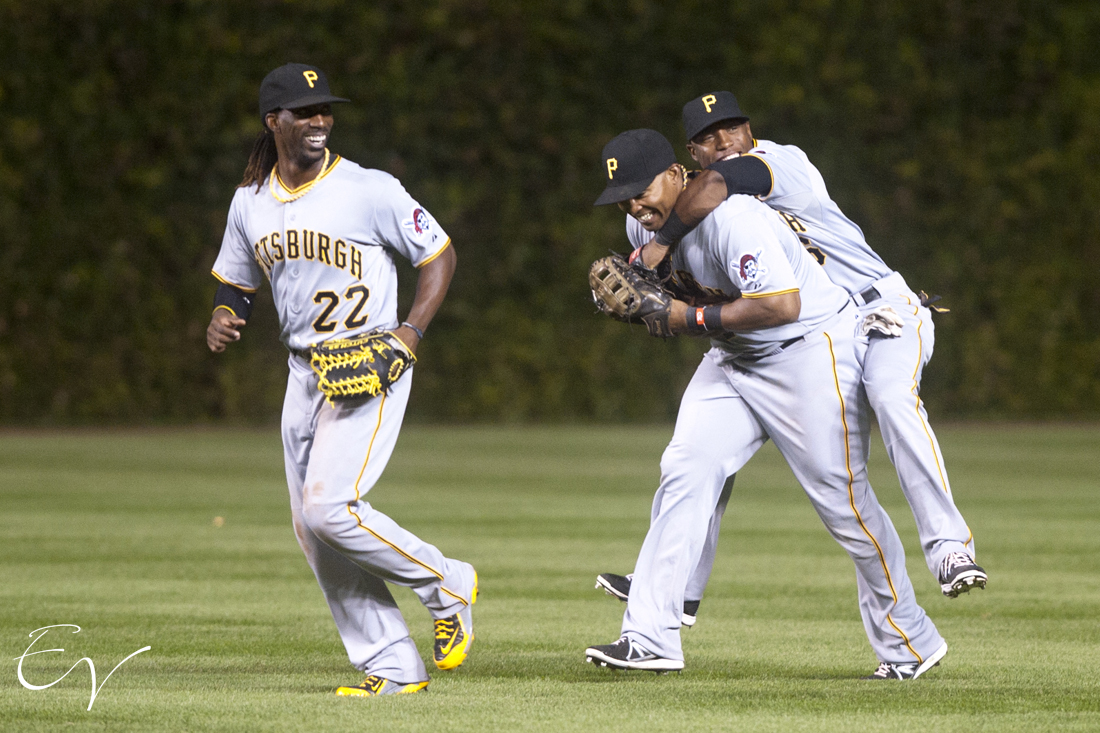 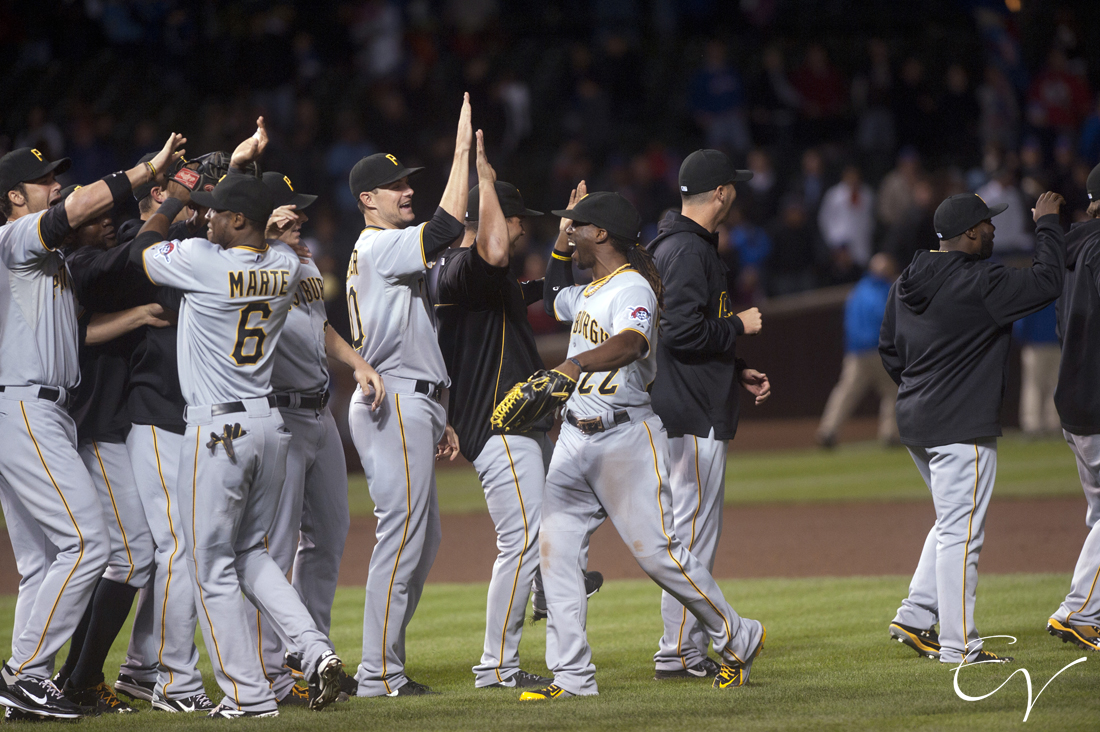 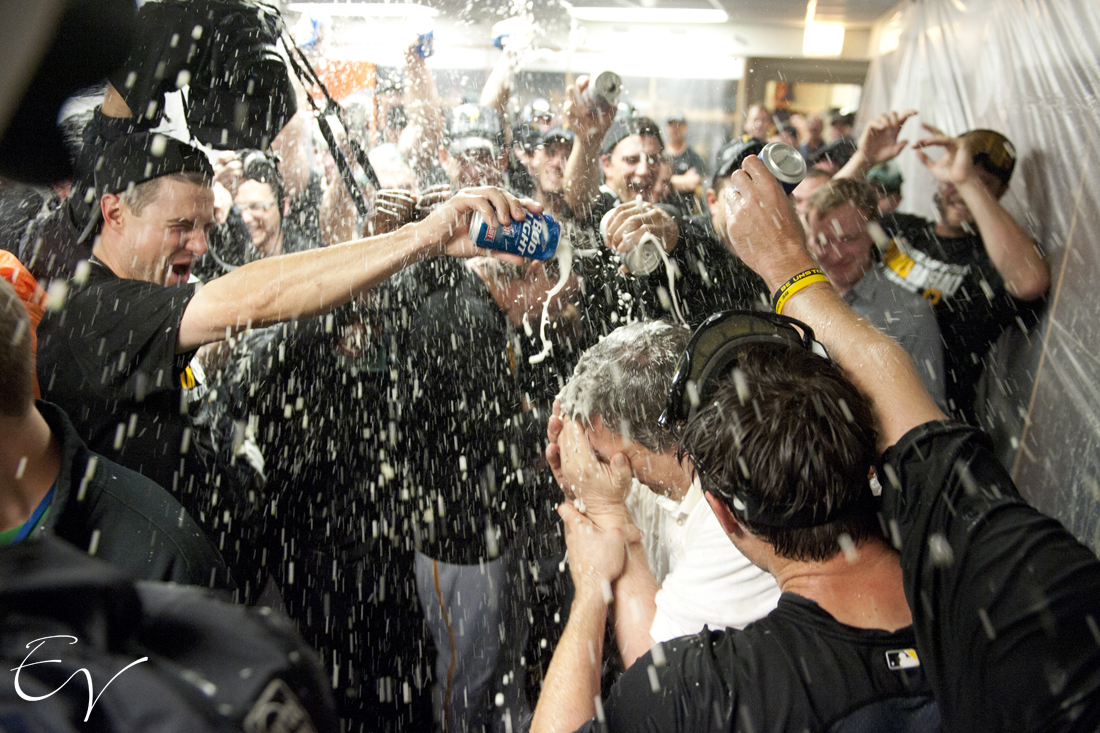 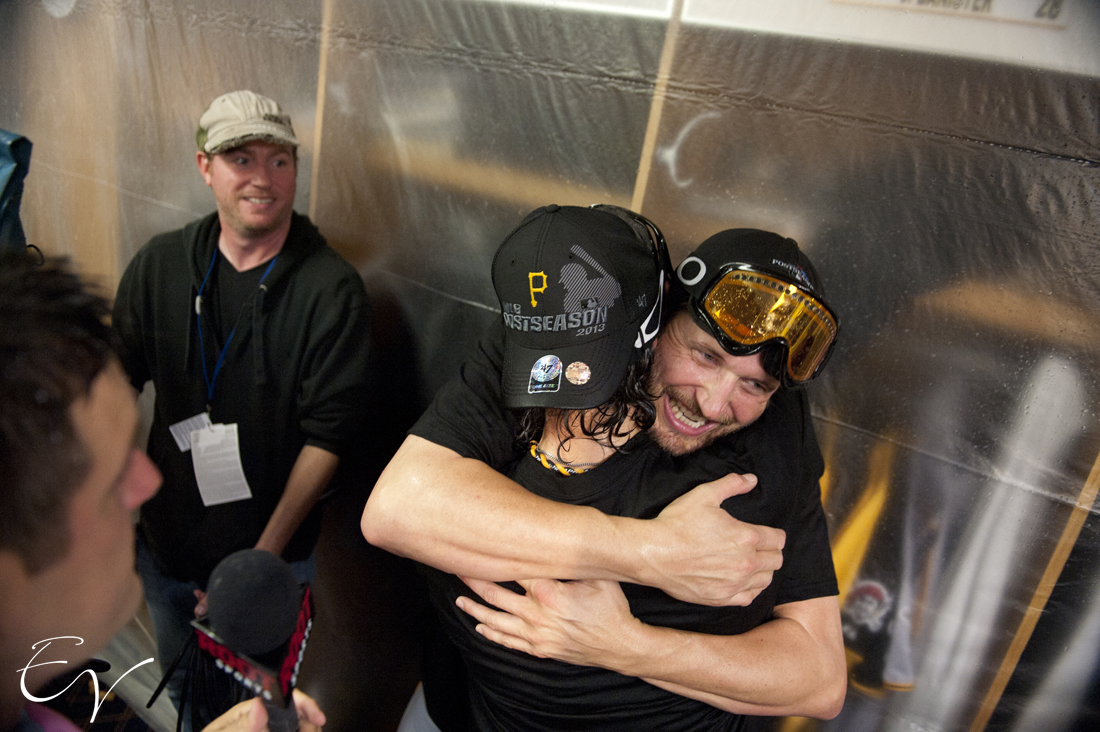 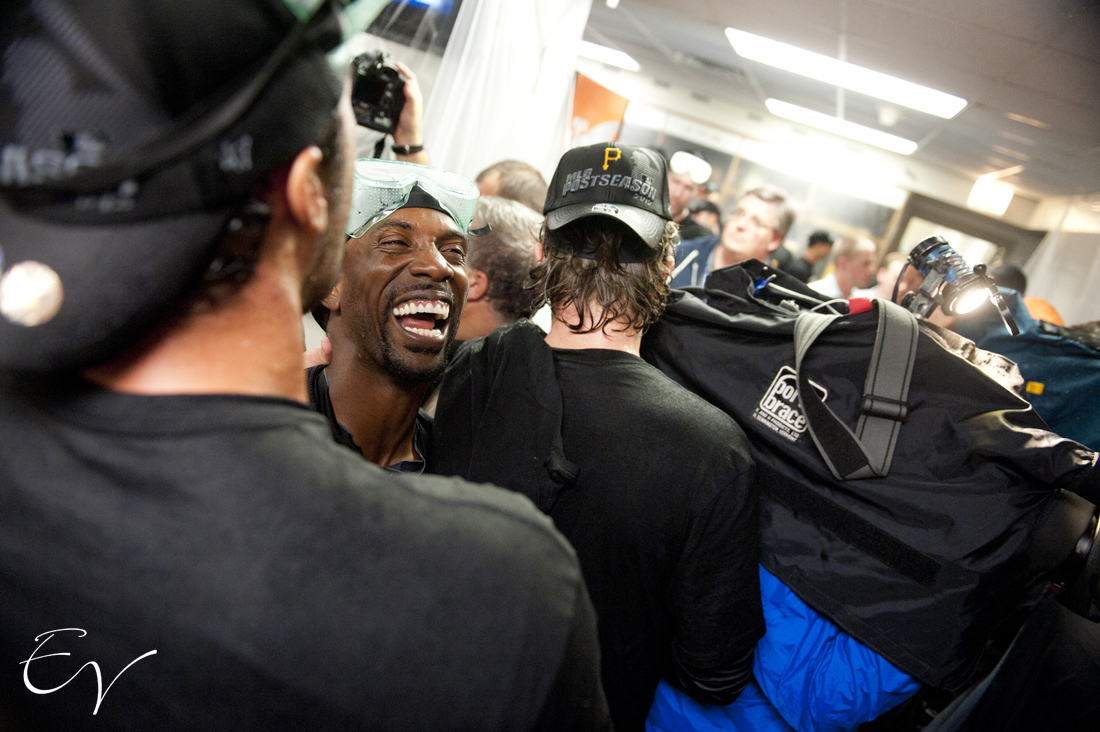 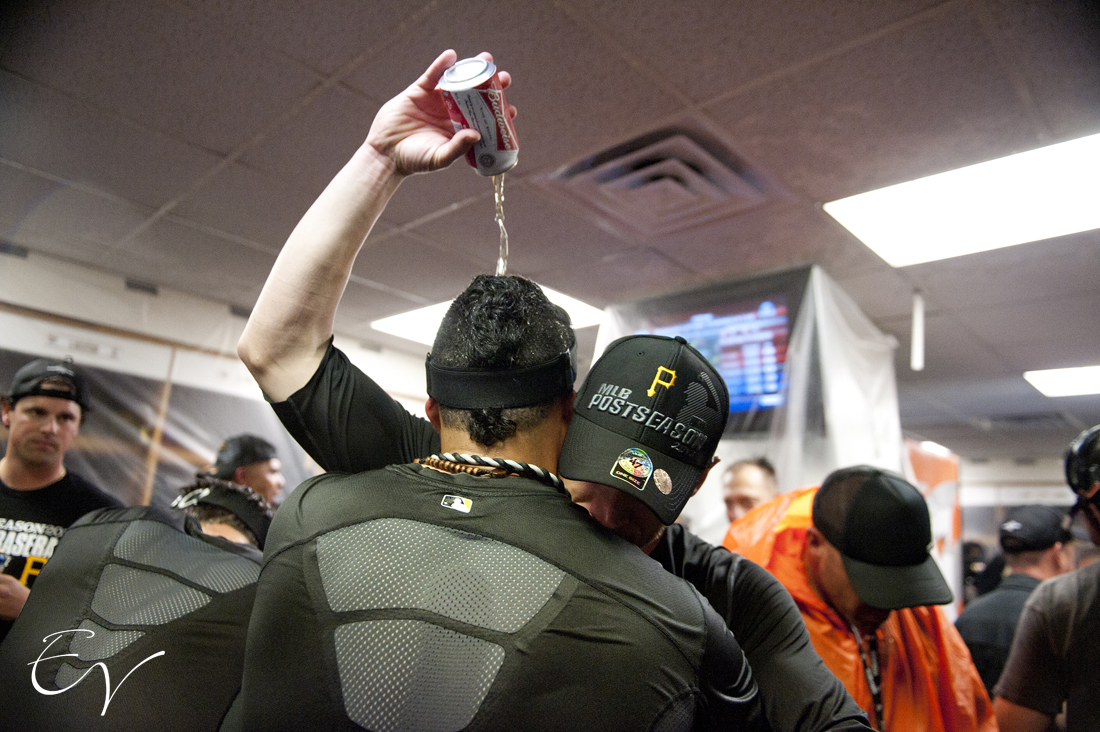 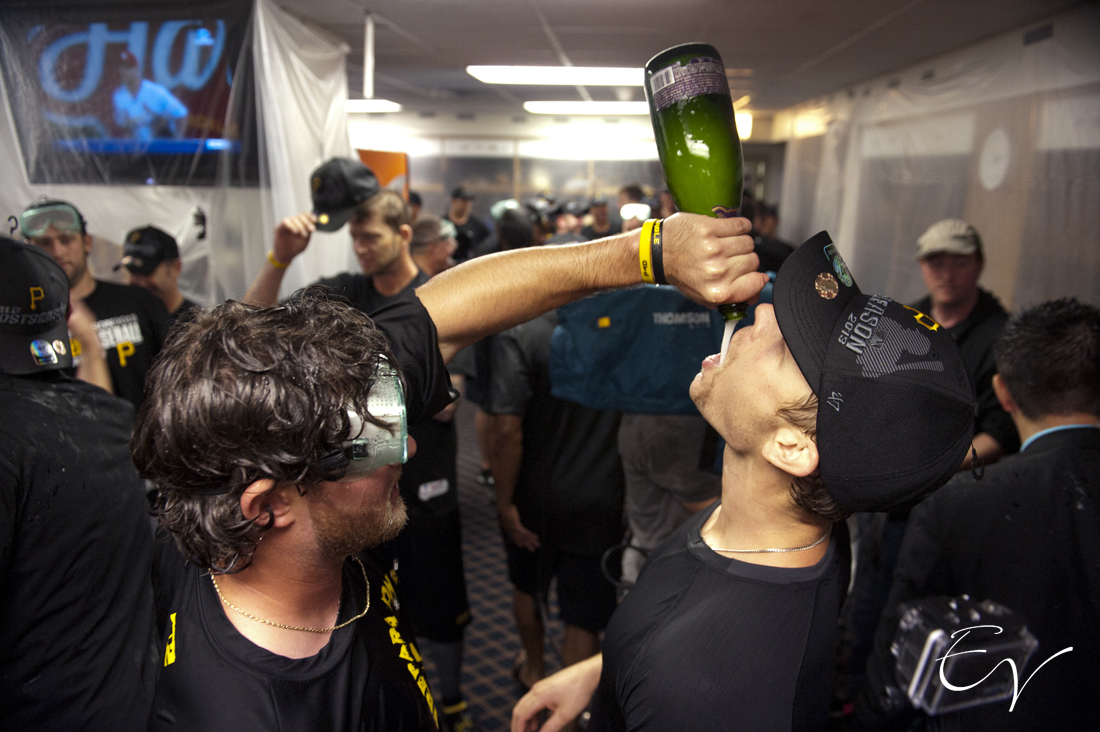 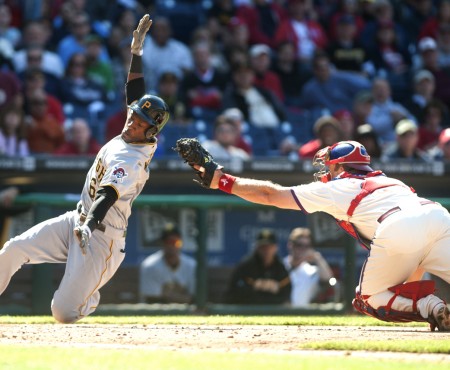 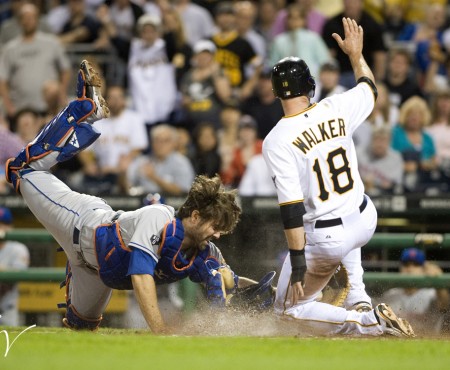